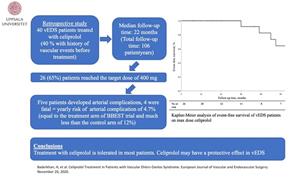 Treatment with celiprolol is tolerated in most patients. Celiprolol may have a protective effect in vEDS.

This published study describes outcomes in 40 patients with COL3A1-positive vEDS that were clinically monitored and treated with celiprolol in a single center retrospective study at Uppsala University Hospital, a national referral center for vEDS patients in Sweden, between the years 2011 and 2019. Patients were followed for a median of 22 months (range 1-98 months) with a total follow up of 106 patient years. Assessments were conducted by a multidisciplinary team, including vascular surgeons, angiologists and clinical geneticists. Celiprolol was administered twice daily and titrated up by 100 mg steps to a maximum of 400 mg per day. Some patients were treated concomitantly or separately with other medications. Sixty-five percent of the patients reached the target dose of 400 mg and the medication was generally well tolerated.

The annual risk of a major vascular event was 4.7% in this study, noted as being similar to that observed in the celiprolol treatment-arm of the BBEST2 trial (5%) and lower than in the BBEST trial control arm (12%). Five patients suffered major vascular events, four of which were fatal. No significant predictor of vascular events was identified by the authors.

“Dr. Björck is an incredibly well-respected vascular specialist in Europe. We are encouraged by his team’s results that add to the growing body of evidence in support of celiprolol’s potential benefit in treating COL3A1-positive vEDS patients,” said Chris Schelling, CEO and Founder of Acer Therapeutics. “Since our meeting with the FDA’s Office of New Drugs (OND) last February, we have been working diligently to evaluate various forms of confirmatory evidence needed to meet the substantial evidence standard. With our partners, we believe we have identified a plan to collect additional data that supports the results from the COL3A1-positive analysis from the BBEST trial and could help meet the standard. As such, we intend to submit a request to the FDA in the next several weeks for a meeting to discuss the appropriateness of our approach.”

An infographic accompanying this announcement is available at https://www.globenewswire.com/NewsRoom/AttachmentNg/f7935f3b-34a5-4373-881a-dee9b971a174

About EDSIVO™
Ehlers-Danlos Syndrome (EDS) is a group of hereditary disorders of connective tissue. vEDS is the most severe subtype where patients suffer from life threatening arterial dissections and ruptures, as well as intestinal and uterine ruptures. The median age of death in the U.S. is 51 years.3 An Acer-commissioned patient-finder study phenotypically identified 4,169 vEDS patients in the U.S. from an analysis of a commercially available patient claims database with data of approximately 190 million unique patient lives. Based on that information, Acer estimates the prevalence of phenotypically-defined vEDS in the U.S. could be greater than 1 in 45,000. Currently, there are no FDA-approved therapies for vEDS.

Acer is advancing EDSIVO™, a new chemical entity (NCE), for the treatment of COL3A1-positive vEDS based on published results from a randomized controlled clinical trial of celiprolol (BBEST).2 In addition, long-term data has now been published from separate French4 and Swedish1 vEDS patient registries.

The FDA granted a priority review of the EDSIVO™ NDA and subsequently issued a Complete Response Letter (CRL) in June 2019. The CRL stated that it will be necessary to conduct an adequate and well-controlled trial to determine whether celiprolol reduces the risk of clinical events in patients with vEDS. In March 2020, Acer received a response to its Formal Dispute Resolution Request (FDRR) from the OND of the FDA stating that it had denied its appeal of the CRL in relation to the NDA for EDSIVO™. In its Appeal Denied letter, the OND described possible paths forward for Acer to explore that could provide the substantial evidence of effectiveness needed to support a potential resubmission of the EDSIVO™ NDA for the treatment of patients with vEDS with a confirmed COL3A1 mutation. The OND referred to the FDA Guidance document issued in December 20195, where substantial evidence of effectiveness can be provided by two or more adequate and well-controlled studies demonstrating efficacy, or a single positive adequate and well-controlled study plus confirmatory evidence. Neither resubmission nor the prospect of approval of the EDSIVO™ NDA is assured. EDSIVO™ received FDA Orphan Drug Designation for the treatment of vEDS in 2015. EDSIVO™ is an investigational drug candidate that has not been approved by the FDA for any indication.

About Acer Therapeutics Inc.
Acer is a pharmaceutical company focused on the acquisition, development and commercialization of therapies for serious rare and life-threatening diseases with significant unmet medical needs. Acer’s pipeline includes four programs: ACER-001 (a taste-masked, immediate release formulation of sodium phenylbutyrate) for the treatment of various inborn errors of metabolism, including urea cycle disorders (UCDs) and Maple Syrup Urine Disease (MSUD); emetine hydrochloride, a host-directed therapy against a variety of infectious diseases, initially for the treatment of patients with COVID-19; EDSIVO™ (celiprolol) for the treatment of vascular Ehlers-Danlos syndrome (vEDS) in patients with a confirmed type III collagen (COL3A1) mutation; and osanetant for the treatment of induced Vasomotor Symptoms (iVMS). Each of Acer’s product candidates is believed to present a comparatively de-risked profile, having one or more of a favorable safety profile, clinical proof-of-concept data, mechanistic differentiation and/or accelerated paths for development through specific programs and procedures established by the FDA. For more information, visit www.acertx.com.

Forward-Looking Statements
This press release contains “forward-looking statements” that involve substantial risks and uncertainties for purposes of the safe harbor provided by the Private Securities Litigation Reform Act of 1995. All statements, other than statements of historical facts, included in this press release regarding strategy, future operations, timelines, future financial position, future revenues, projected expenses, regulatory submissions, actions or approvals, cash position, liquidity, prospects, plans and objectives of management are forward-looking statements. Examples of such statements include, but are not limited to, statements relating to the potential for our product candidates to safely and effectively treat diseases and to be approved for marketing; the commercial or market opportunity of any of our product candidates in any target indication and any territory; our ability to secure the additional capital necessary to fund our various product candidate development programs; the adequacy of our capital to support our future operations and our ability to successfully fund, initiate and complete clinical trials and regulatory submissions; the ability to protect our intellectual property rights; our strategy and business focus; and the development, expected timeline and commercial potential of any of our product candidates. We may not actually achieve the plans, carry out the intentions or meet the expectations or projections disclosed in the forward-looking statements and you should not place undue reliance on these forward-looking statements. Such statements are based on management’s current expectations and involve risks and uncertainties. Actual results and performance could differ materially from those projected in the forward-looking statements as a result of many factors, including, without limitation, risks and uncertainties associated with the ability to project future cash utilization and reserves needed for contingent future liabilities and business operations, the availability of sufficient resources to fund our various product candidate development programs and to meet our business objectives and operational requirements, the fact that the results of earlier studies and trials may not be predictive of future clinical trial results, the protection and market exclusivity provided by our intellectual property, the substantial costs and diversion of management’s attention and resources which could result from pending securities litigation, risks related to the drug development and the regulatory approval process, including the timing and requirements of regulatory actions, and the impact of competitive products and technological changes. We disclaim any intent or obligation to update these forward-looking statements to reflect events or circumstances that exist after the date on which they were made. You should review additional disclosures we make in our filings with the Securities and Exchange Commission, including our Quarterly Reports on Form 10-Q and our Annual Report on Form 10-K. You may access these documents for no charge at http://www.sec.gov.

American IRA Discusses How Does a Self-Directed IRA Actually Work?

American IRA Discusses How Does a Self-Directed IRA Actually Work?